Introduction to the Humanities

Writing as a Process of Discovery

Writing is the process of discovering and developing your thought, not merely the transcription of already complete thought. Being prepared to recognize and incorporate new insights as they arise is key to developing your powers of analysis and to improving your writing.

You will do your best and most intellectually gratifying work if you allow time for your thought and writing to evolve rather than beginning a paper the day before the deadline. The three basic elements of paper writing are presented in sequence here for clarity. However, incorporating new ideas as they come up in the writing process often requires moving back and forth between your argument and your evidence. 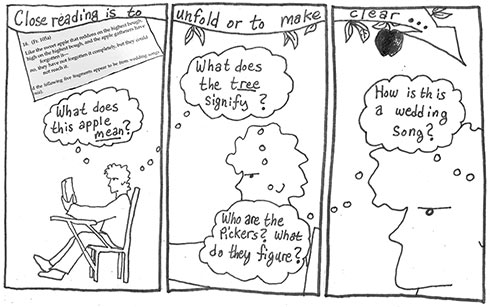 "A close reading (or Explication de texte) operates on the premise that any artistic creation will be more fully understood and appreciated to the extent that the nature and interrelations of its parts are perceived, and that that understanding will take the form of insight into the theme of the work in question. This kind of work must be done before you can begin to appropriate any theoretical or specific approach."1

To explicate comes from the Latin explicare, to unfold, to fold out, or to make clear the meaning of. When you close read, you observe facts and details about the text. Your aim is to notice all striking features of the text, including rhetorical features, structural elements, cultural references or allusions. A close reading should be more than a list of devices, though. The essay should move from observation of particular facts and details to a conclusion, or interpretation, based on those observations. What do these data add up to mean?2

Stage Two: You Need an Argument

As you've read the texts, attended lecture and conference, you've already formed interests and ideas. Think about how these might align with the assigned topic(s). Re-articulate the topic in your own words as a question or questions that have particular salience for you. These questions can be directly incorporated in your introduction.

Jot down your immediate hunches, intuitions, and speculations about the paper topic. Use the most specific and concise phrases you've come up with to write out a first draft of your argument as a claim or series of claims.

The first draft of an argument is usually only a rough approximation of what you'll ultimately discover as you proceed with analysis of the text(s). The most important elements of your thought will be obscure to your reader if your argument doesn't ultimately transmit the full content or potential of that thought. Genius, says Aristotle, is the ability to state the obvious: to express a complex thought so clearly that it will suddenly appear simple and noncontroversial. E = mc2, for example.

One strategy for working toward the complete expression of thought is to submit every vagueness or imprecision in the first draft to the scrutiny of a question. As you reread your draft, wherever you pause over some element of a sentence with the sense "it's not exactly what I mean, but the reader should get it," stop. Practice Socratic questioning on yourself.

Here is an example of how one Reedie used this process both to engage in deeper analysis and to arrive at more accurate articulation of his argument:

The assigned paper topic was: One of the longest recurrent passages in The Odyssey is the account of Penelope's weaving and unweaving of the shroud. This story is told first by Antinous in Book 2; then by Penelope in Book 19; and finally by Amphimedon in Book 24. After studying each of these passages and reflecting on the different contexts in which the story is told, select one account and argue for you own close reading of it, including what information it yields about the speaker's character and motivations, about his or her audience, and about the particular spin given to the story in the instance you have chosen. You might also consider how your chosen passage contributes to or omplicates the meaning of The Odyssey as a whole.

In his comparison of these three passages, this student chose to focus on Penelope's story. Here are four drafts of his thesis, punctuated by the questions that improved it.

Draft 1: When Penelope recounts the tale herself, what it tells the reader about her character, her audience, and how it is told shows a cultural self-reflection of values.

[Exactly WHAT VALUES are at stake?]

Draft 2: Penelope's account of the tale shows a cultural self- reflection of the Homeric values of xenia, openness, and cunning through what it reveals about the speaker, her audience, and the context in which the story is told.

[Does this sentence reflect a clear and coherent unit of thought? Are two or three thoughts blurred into a single claim?]

Draft 3: Penelope's account of the tale demonstrates the Homeric tradition's capacity for self-reflection about its own cultural values. By examining the speaker, her audience, and the context for her story, I will show that these values include xenia or hospitality, openness and trust, and strategical cunning.

[the LIST of values has added precision : now can the claim be more analytically conceptualized as a RELATION or a DEFINITION?]

Final Draft: Penelope's account of the tale demonstrates the Homeric tradition's capacity for self-reflection about its own cultural values. By examining the speaker, her audience, and the context for her story, I will argue that Penelope strategically uses xenia as a relation in which openness, trust, and cunning play equally vital roles.

A second strategy for shaping your argument can be found in Joseph Williams' The Craft of Argument. He writes that most academic articles have four main components. Usually these components appear in the introduction to the article, but sometimes they are woven throughout the article.

These four parts are:

Here is an example of an introduction with this format:

Repetition is a standard part of Homeric epic, the same stories told and phrases used by different characters at various points in poems. These repetitions have often been viewed as insignificant, an inevitable result of works shared orally, from memory: what could be more natural, for a poet working from memory, than adapting a single tale multiple times? One of the most famous episodes of The Odyssey, Penelope's weaving and unweaving of the shroud, is told no fewer than three times, by Antinous, Amphimedon, and by Penelope herself, without much apparent change in substance. (the context, commmon ground) However, each time a story is re-told, it undergoes shifts and revisions depending on the person telling the tale, or the context in which it is told. (the but) These changes can indicate important differences among various characters' points of view, ultimately demonstrating the poem's capacity for self-reflection about its own cultural values. (the so what, significance) Penelope's variant of the shroud story reveals that she understands xenia to combine openness, trust, strategy and cunning. (the thesis)

CAVEAT EMPTOR: Each conference leader will have different preferences regarding thesis statements and presentation of evidence. Asking for clarification is the best way to know what is expected. 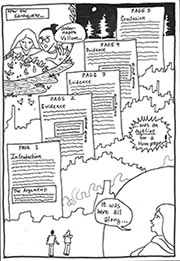 Reread the primary text(s) with the paper topic, your question, and your draft argument in mind, identifying parts of the text that provide specific evidence to support your argument. Type out quotes you are sure you want to use; mark those you are not so sure of.

Write a short analytical paragraph about each quote, concept or episode from the text(s) that you have decided to use as evidence. Each of these paragraphs should provide a sentence about the context from which the evidence is drawn, paraphrase or quote the evidence, and analyze the evidence. In providing your interpretation of what is most significant to you, be as honest and specific about your perceptions as possible. If your insights seem contradictory to you, try integrating them into sentences that say something like “it is both the case that _____ and the case that ____” or “paradoxically, both x and y seem true.”

Think about what you’ve discovered by analyzing the evidence that wasn’t yet entirely clear to you when you first drafted your argument. Revise the draft argument, adding to it the new claims you’ve discovered and subtracting from it old terms or claims that oversimplify your analysis of evidence. Conversely, revise your analysis of the evidence by modifying or subtracting the parts that no longer sustain the new draft of your argument.