As everyone knows, Steve Jobs went to Reed, but didn't graduate. (He may, in fact, be one of the most famous dropouts in history.) Nonetheless, Reed made a profound impression on him. 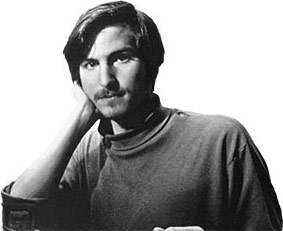 Questioning everything and everyone, Steve dropped out of Reed and then dropped back in, taking courses in calligraphy, dance, and Shakespeare that would prove invaluable in designing the revolutionary Apple Macintosh.

Find the full story of his time at Reed in his obituary in Reed Magazine, Visionary Technologist, Prodigal Son.

Steve’s 1991 convocation speech at Reed, Staying Hungry, offers a glimpse into how his threadbare days on campus shaped his philosophy.

Find out why Steve called legendary dean of students Prof. Jack Dudman ’42 "one of the heroes of my life."

Take a look at Steve's notorious application for a campus job—a classic example of how not to write a résumé.

Learn how calligraphy classes at Reed taught Steve to think like an artist.

Find out more about one of Steve's closest friends at Reed, Prof. Richard Crandall ’69 [physics], who wrote several key algorithms for Apple, including one that led to the discovery of gargantuan prime numbers.

More about Computing at Reed

Reed has a proud history of technology that stretches back to the 1930s.

Reed alumni play a prominent role in the high-tech scene in Portland and around the world. As of October 2015, roughly 10% of our working alumni hold jobs in the field of technology.