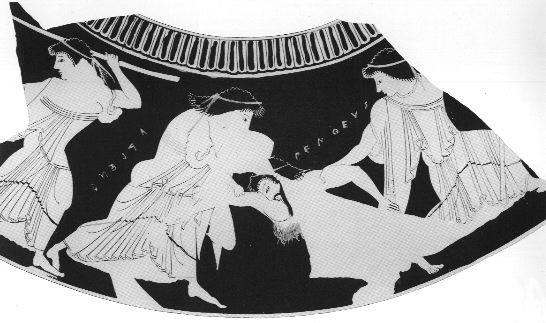 The Iconography of Dionysus and the Bacchants

This section displays images from the Perseus web site rendered in small sizes to make the page manageable. Clicking on the images will take you to the full sized version at Perseus in a new browser window. Some of these images are viewable only with privileged access to the Perseus site (automatic for all Reed users).

The Dionysus of the Bacchae is a young god. Pentheus comments on his appearance (the passage suggests the sort of homoerotic longing which the Greeks believed to be characteristic of that stage of life between boyhood and manhood, a time of potential confusion about sexuality and gender identity):

So, you are attractive, stranger, at least to women --
Which explains, I think, your presence here in Thebes.
Your curls are long. You do not wrestle, I take it.
And what fair skin you have -- you must take care of it --
No daylight complexion; no, it comes from the night
when you hunt Aphrodite with your beauty. (453-458)

This gold coin, a half-stater of the early 4th century BC from the island of Thasos, shows a Dionysus with some of these same characteristics. For the ivy wreath in his hair, a ubiquitous iconographic attribute of Dionysus, compare line 81: "Blesséd are those who wear the crown of ivy of god."

Another youthful and handsome Dionysus graces this silver stater from Heracleia Pontica on the Black Sea, mid 4th century. 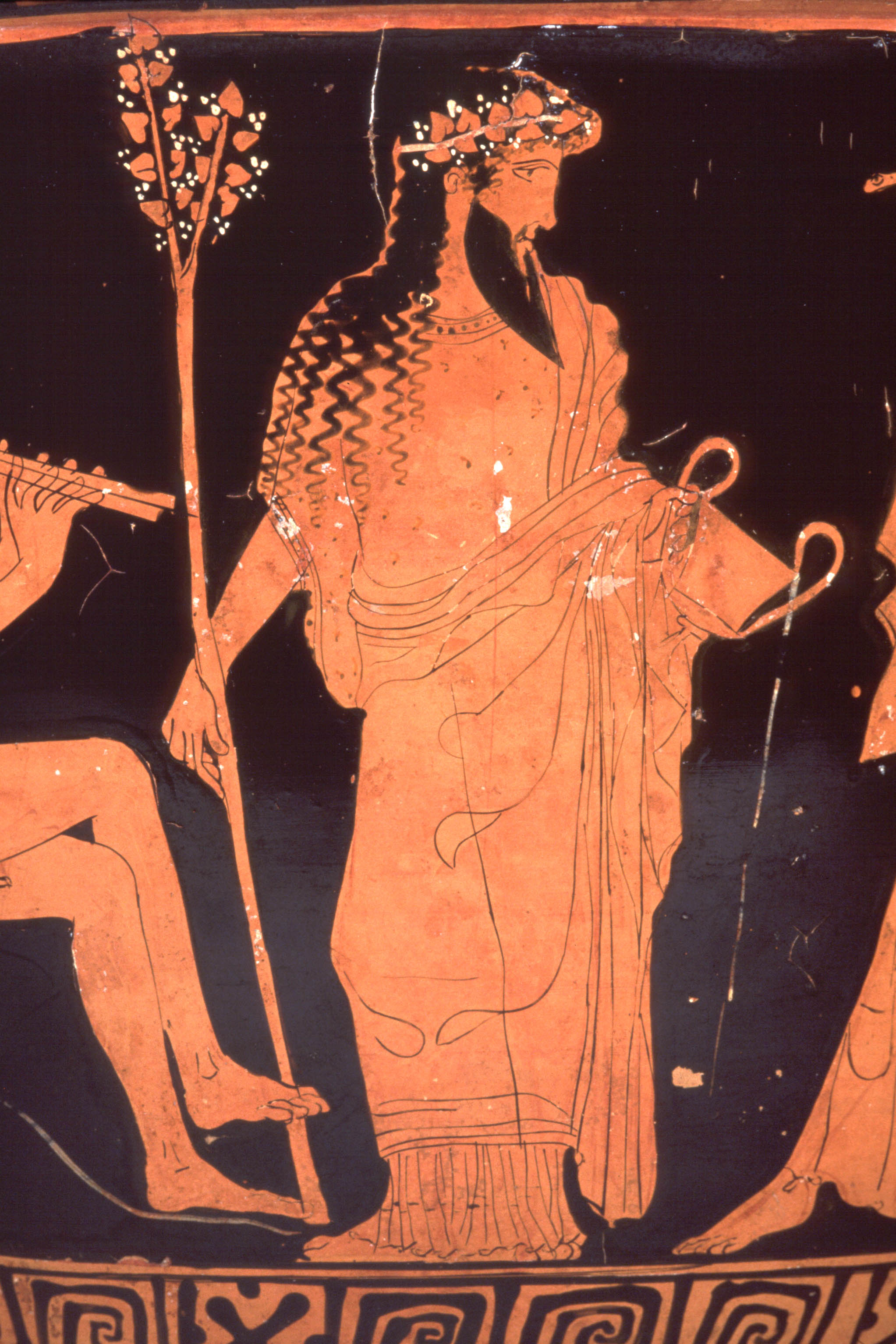 Dionysus is also sometimes depicted as more mature, connoted by the conventions of Greek art with a beard, as in this vase painting, an Attic Red Figure Kylix of c. 440-430 BC. In his right hand the god holds the thyrsus, the stalk of fennel or vine branch, to which there are repeated references in the play. With his left he pours a libation from a wine cup (of a type called kantharos). His long flowing hair is also characteristic (compare Bacchae 150: "... and his long curls stream to the wind").

A wider view of the same vase. Dionysus is flanked by a satyr or silen on one side and a maenad on the other. 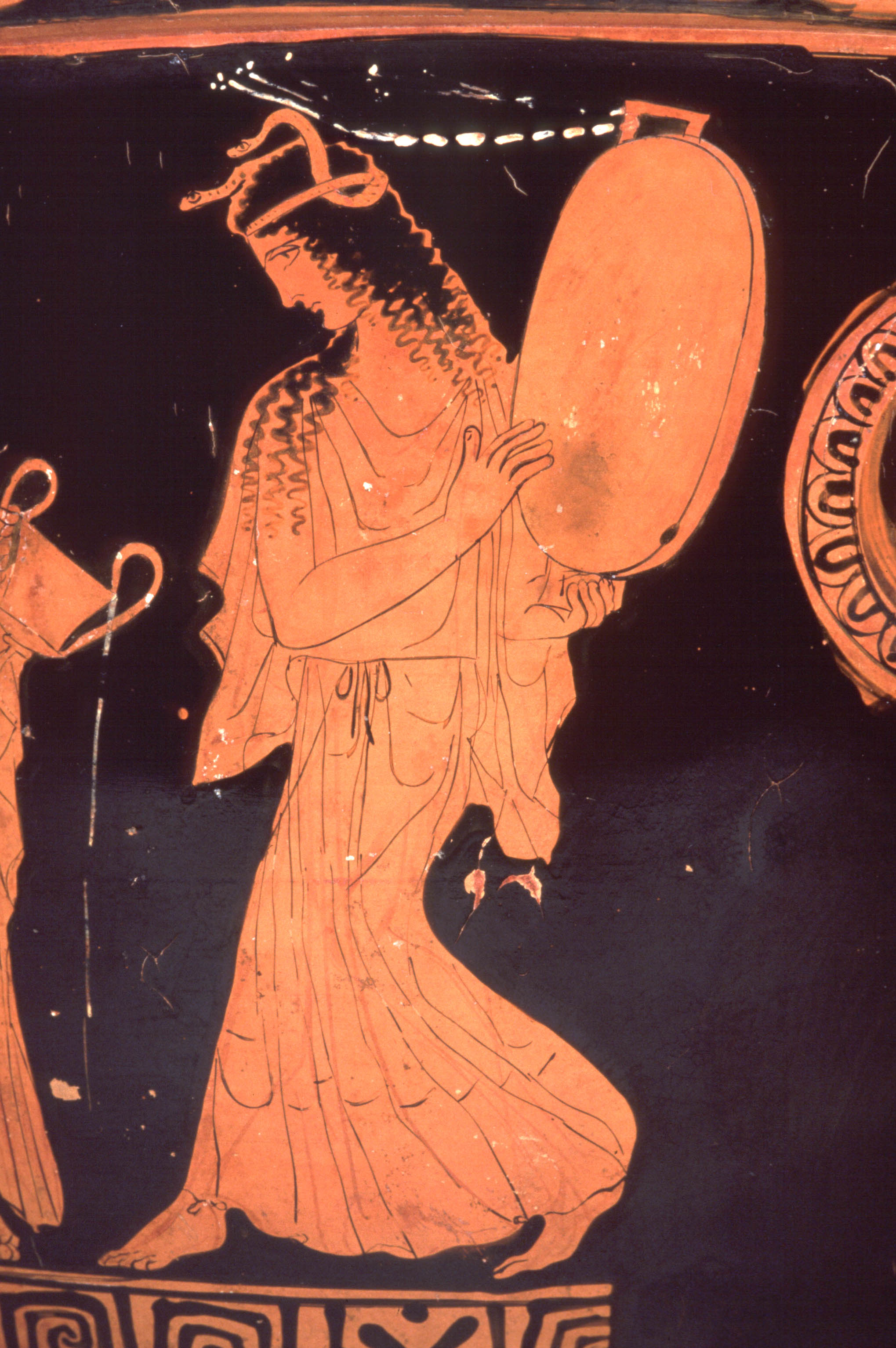 The close-up of the Maenad lets us consider how closely she corresponds to the indications given in the play. The messenger who recounts how he saw the Bacchants defeat the armed men sent against them by Pentheus gives the fullest description of their appearance (695-701):

First they let their hair fall loose, down
over their shoulders, and those whose straps had slipped
fastened their skins of fawn with writhing snakes
that licked their cheeks. Breasts swollen with milk,
new mothers who had left their babies behind at home
nestled gazelles and young wolves in their arms,
suckling them. Then they crowned their hair with leaves ...

The Maenad on the vase has the requisite flowing locks and ivy crown; she also sports two snakes, although these are part of her wreath rather than fasteners for her dress. Her feet are bare (compare Bacchae 665) and she is dancing, playing the Phrygian drum called the tympanon (mentioned by Dionysus at lines 59-60). 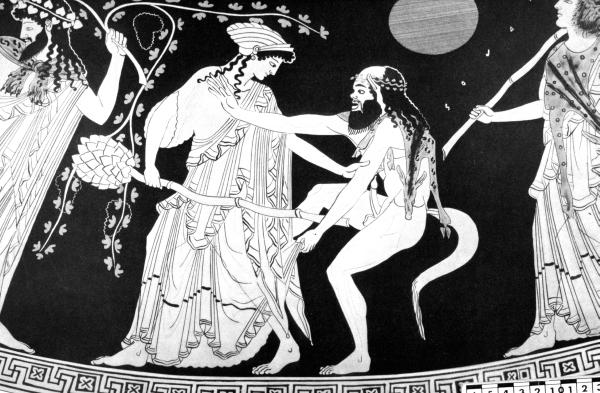 The Maenad on the right in this drawing of a scene on an Attic Red Figure pointed neck amphora (c. 500 BC) wears the fawn skin which in the play is part of the costumes of the Bacchants, Teiresias and Cadmus, the god, and eventually Pentheus as well. The other Maenad, in the center, uses the thyrsus as a weapon to fend off the advances of an ithyphallic satyr. The image of the Maenad defending her virtue is a common one; it suggests the emphasis in the play on the chastity of the Bacchants (314-318, 487-488, 811-816).

Maenads were not always depicted as chaste, however. The painter of this Attic Red Figure calyx krater of c. 420 BC thinks of the rites in the same way Pentheus does; here a beardless voluptuary Dionysus embraces an unresisting maenad. The lack of refinement evident in the execution mirrors that of the conception.

The Bacchae of Euripides is a major source for the ancient Greek conception of Dionysus, but not the only source. Aristophanes gives us a very different, comedic version of Dionysus in his play, the Frogs, which was produced in 405 BC, around the same time as the production of the Bacchae (Hum. 110 time line). Here we find another take on the association of Dionysus with theatricality and the reversal of roles. Dionysus has gone down to the underworld to bring back one of the three great tragedians, since they are all dead and Athens needs the advice of a good poet to avoid losing the war to the Spartans. To do this Dionysus disguises himself as Herakles, since Herakles has already been there and should be welcome. This plan backfires and it turns out that Herakles is rather unpopular in Hades, so Dionysus changes identities with his slave Xanthos; Xanthos becomes Herakles and Dionysus becomes Xanthos the slave.

The Homeric Hymn to Dionysus comes to us as part of a small corpus of short hexameter hymns, attributed to Homer but actually all composed later than the Iliad and Odyssey. The hymns are in the Homeric style and were probably performed as preludes to recitals of the epics. One conventional element of the Greek hymn is to relate an exploit of the god. The Hymn to Dionysus tells, not of Dionysus and Pentheus, but rather of how the god defeated some Tyrrhenian pirates who tried to take him captive to be sold as a slave. Although the tales are different, there are clear links between this Dionysus and the one who appears in Euripides' Bacchae.

The Cyclops is not a tragedy but a satyr play, a sort of burlesque, humorous treatment of a mythical theme. All of the tragedians wrote satyr plays; they were put on as the fourth play after a tragic trilogy. Although Dionysus does not appear in the play, the chorus of satyrs and their leader, Silenus, are devotees of Dionysus. Their references to the god evoke the baser aspects of the Dionysiac revelry. In this scene, Odysseus persuades Silenus to betray his master (the Cyclops) and sell Odysseus some cheese in exchange for wine. Odysseus will later blind the Cyclops and escape; the story comes from the Odyssey, Book 9.

4. Herodotus and the origins of the god

Herodotus thinks Dionysus, like many other Greek deities, is Egyptian in origin. Many moderns used to accept the Greek tradition that Dionysus was a recent import from the east. But new evidence indicates otherwise; the name of the god appears on the Linear B tablets, and there is some debatable archaeological evidence that he was worshipped during the Bronze Age at a shrine at Ayia Irini on the island of Keos.

In Greece, the ritual oreibasia (mountain dancing) at a fixed date may originally have developed out of spontaneous attacks of mass hysteria. By canalizing such hysteria in an organized rite once in two years, the Dionysiac cult kept it within bounds and gave it a relatively harmless outlet. What the parodos (choral dance) of the Bacchae depicts is hysteria subdued to the service of religion.

Dionysos can seemingly be defined quite simply as the god of wine and of intoxicated ecstasy. Intoxication as a change in consciousness is interpreted as the irruption of something divine. But the experience of Dionysos goes far beyond that of alcohol and may be entirely independent of it; madness becomes an end in itself. Mania, the Greek word, denotes frenzy, not as the ravings of delusion, but, as its etymological connection with menos [meaning "strength"] would suggest, as an experience of intensified mental power. Nevertheless, Dionysian ecstasy is not something experienced by an individual on his own; it is a mass phenomenon and spreads almost infectiously. This is expressed in mythological terms by the fact that the god is always surrounded by the swarm of his frenzied male and female votaries. Everyone who surrenders to this god must risk abandoning his everyday identity and becoming mad; this is both divine and wholesome.

If feminization is the emblem of Pentheus' defeat, Dionysus' effeminacy is a sign of his hidden power. Here are two males, cousins in fact through their genealogical ties, both engaged in a masculine contest for supremacy. One, however, gains mastery by manipulating a feminized identity, and the other is vanquished when he finally succumbs to it. What we might perceive in their ensemble at the moment when the two males appear together onstage in similar dress is an instructive spectacle of the inclusive functions of the feminine in the drama - one on the side of femininity as power and the other on the side of femininity as weakness.

We might want to view the androgyny of Dionysos ... as a true mixture of masculine and feminine. This mixture, it can be argued, is one of the emblems of his paradoxical role as the disrupter of the normal social categories; in his own person he attests to the coincidentia oppositorum [coincidence of opposites] that challenges the hierarchies and rules of the public masculine world, reintroducing into it confusions, conflicts, tensions, and ambiguities, insisting always on the more complex nature of life than masculine aspirations would allow. Such a view would stress male and female aspects alike; it would regard the god as embodying a dynamic process or as configuring in his person an alternate mode of reality. Convincing as this view may be, it runs the risk of underrating the fact that it is precisely Dionysos' identification with the feminine that gives him and his theater their power.

Text of the Bacchae from Perseus

Browse 134 vases in Perseus with images of Dionysus.

A keyword search of all Perseus texts which mention Dionysus.

Browse images of Dionysus from various sources stored at Haifa.

This page was designed by David Silverman.